Rubicon are back sponsoring the 3rd Annual Girls Skate Comp at Relentless NASS and it will be biggest girls event ever in the UK. 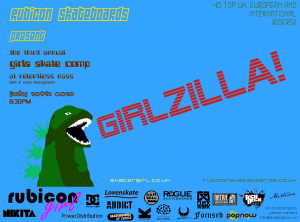 The Summer is upon us and so is the 3rd Annual Girls Skate Comp “Girlzilla” at Relentless NASS Festival. There’s already some serious buzz building about the comp as there will be 40 riders including top UK girls like Lucy Adams and Lois Pendlebury being joined by a strong European contingent like Evelien Bouilliart (European Skateboard Championships Winner) and Emma Lindgren (Swedish Skateboard Awards Winner), who are in turn joined by some international talent like Leticia Bufoni (Maloof Money Cup Winner) and Vanessa Torres (tbc) (X Games Gold). There’s tonnes of other great riders on the list with some exciting new talent to watch out for, and with the mens World Cup Skateboarding event also going on at NASS, there will be loads of coverage and the organisers are already saying “Boys, Bring It On!“.

The festival runs from the 9th to 11th July with the girls skate comp on Saturday 10th at 8:30pm. There’s over 40 music acts including the likes of Bowling For Soup, Chase & Status and Tinie Tempah (click the image to the right for full list) – and there’s more action sports than you can shake a stick at with BMX, Skate, Inline, Freestyle MotorX, Parkour and more!!

It’s going to be an amazing event and the girls skate comp will play a great part of that – seriously raising the bar. All the girls who have entered the comp will receive free riders passes to the entire weekend which is a great way to support the scene – and there’s a great host of sponsors putting up a bunch of cash and product for the comp to make it something to remember.

Here’s a few quotes from the media build-up:

“Relentless NASS 2010 is super excited about what will be the strongest athlete list to date. They are literally coming from around the world!”

“Relentless NASS has a lot on it’s hands as the Girls Skate competition athlete’s are flooding in and opening up the gates to a battle of the sexes.”

Spread the word – and come along and support.

Full story and info coming over at SkaterGirl